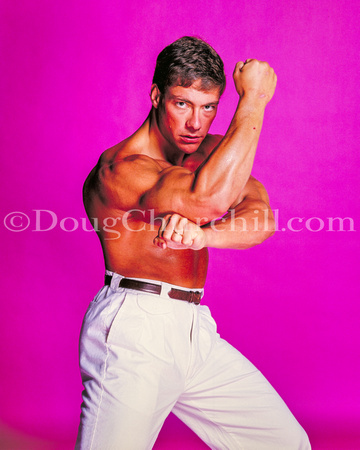 Jean Claude studied martial arts since he was 12 years old, when his father took him to train under Claude Goetz. Jean Claude's study of the martial arts was intense - he went on to become a member of karate Team Belgium, and eventually won the European Professional Karate Association's middleweight championship.

Always ambitious and a motivated entrepreneur, Jean Claude opened the California Gym while still in his teens. Then, in 1982, Jean Claude moved to Hollywood to pursue his goal of becoming a star. His big break came when he performed a spin kick in front of producer Menahem Golan, CEO of Menahem Pictures, outside of a Hollywood restaurant.

Golan was so impressed by Jean Claude's ability, he hired him for 1987's martial arts classic, BLOODSPORT -- still a favorite among martial arts/action fans.

Jean Claude's superb athleticism, attained through years of karate, ballet and bodybuilding training, has made him an acclaimed, international action star.

During his career, Jean Claude has been nominated three times (1992, 1993, & 1994) for an MTV Movie Award, in the Most Desirable Male category, and was nominated for Best Actor by the Video Premier Awards for his dual role in 2001's REPLICANT.

Jean Claude is currently working on his latest film, WAKE OF DEATH, which is being shot in England and South Africa.

Jean Claude is married and he has three children, Kristopher, Bianca and Nicolas.