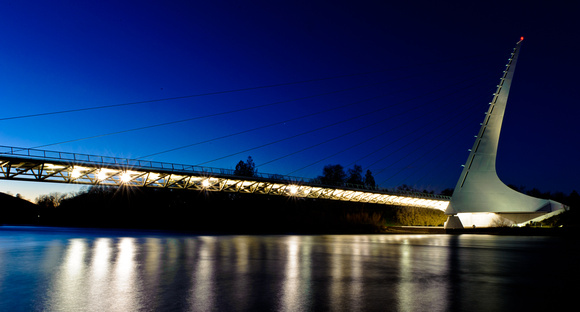 The Sundial Bridge at night, from the shore of the Sacramento River. Used my Nikon D700 at a 30.0 sec exposure.

"The Sundial Bridge at Turtle Bay crosses the Sacramento River in the heart of Redding, California. Opened July 4, 2004, the bridge links the north and south campuses of Turtle Bay Exploration Park and serves as a new downtown entrance for Redding’s extensive Sacramento River Trail system.

The bridge celebrates human creativity and ingenuity, important themes of the 300 acre Turtle Bay Exploration Park. The steel, glass, and granite span evokes a sense of weightlessness and the translucent, non-skid decking provides for spectacular viewing at night. The bridge is also environmentally sensitive to its river setting. The tall pylon and cable stays allow the bridge to avoid the nearby salmon-spawning habitat there are no supports in the water while encouraging public appreciation for the river. Plazas are situated at both ends of the bridge for public use; the north-side plaza stretches to the water allowing patrons to sit at the river’s edge.

In addition to being a functional work of art, the Sundial Bridge is a technical marvel as well. The cable-stayed structure has an inclined, 217 foot pylon constructed of 580 tons of steel. The deck is made up of 200 tons of glass and granite and is supported by more than 4,300 feet of cable. The structure is stabilized by a steel truss, and rests on a foundation of more than 115 tons of steel and 1,900 cubic yards of concrete. The McConnell Foundation, a private, independent foundation established in Redding in 1964, funded the majority of the bridge’s $23 million cost.