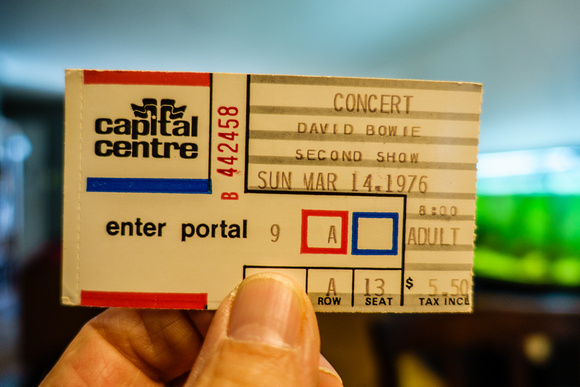 It was a fantabulous show, and an opportunity to see my rock and roll idol, David Bowie.. Back in the day, anybody could bring in a 35mm SLR camera, which I did. The photos were crap since I was a n00b with a Canon AE-1 SLR and cheapo telephoto lens, trying to shoot a concert with color slide film.

"The David Bowie Isolar – 1976 Tour[1] was a concert tour in support of the album Station To Station. It opened on 2 February 1976 at the Pacific Coliseum, Vancouver, British Columbia, and continued through North America and Europe, concluding at the Pavillon de Paris in Paris, France, on 18 May 1976. The tour is commonly referred to as Thin White Duke Tour,[2] The Station to Station Tour,[3] and The White Light Tour.[4]

The performances began with a projected sequence of surrealist images, depicting a razor blade cutting into an eyeball, from the 1928 film Un Chien Andalou,[5] by Luis Buñuel and Salvador Dalí. The visual element of the performances incorporated banks of fluorescent white light set against black backdrops creating a stark spectacle on a stage largely devoid of props or other visual distractions.

The Public Auditorium, Cleveland, Ohio performance on 28 February 1976 was recorded by a concert-goer and released as the bootleg entitled "NeoExpressionism" on the TSP (The Swinging Pig) label. It would be digitally re-mastered in 2007 and the entire set released on 2 CD's. The only song not done at this performance is "Sister Midnight."

The Nassau Veterans Memorial Coliseum, Uniondale, New York, performance on 23 March 1976 was recorded by RCA Records with extracts broadcast by The King Biscuit Radio Network. Two songs from the performance were later included on the 1991 Rykodisc re-issue of the Station to Station album. The entire Nassau performance is available on the 2010 deluxe edition of Station to Station.